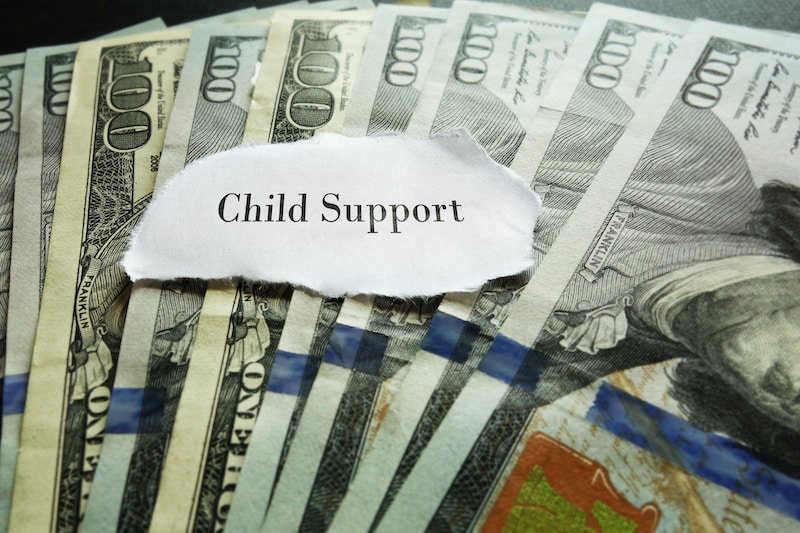 Many may wonder "Do women pay child support?" Well. a lot of people think about child support and custody along very gendered lines—the mother has primary custody, and the father pays support.

However, this certainly isn’t always the case. Women paying child support do exist!

That said, there are a lot of factors involved in determining custody and child support arrangements. It isn’t always as simple as “when men have primary custody, women pay child support.”

Let’s explore some of these considerations and cover some financial planning tips for women paying child support.

How does child support work? 6 Factors the courts consider

Before we answer "Do women have to pay child support?" let's cover how child support actually works in the first place. When families separate, it doesn’t automatically mean that one parent will owe the other one child support.

Some parents may share joint custody. Some might make an out-of-court arrangement if they’re both reasonable and committed to co-parenting.

However, divorce and separation tend to be tough and emotionally grueling. Sometimes involving the legal system is the best way to keep things fair for everyone—most importantly the child or children.

A parent who wants legally ordered child support must file a petition and appear in court if necessary. Every state has its own formula to decide who will pay and how much.

In order to determine legal child support agreements, the courts usually look at some or all of the following factors.

1. Who has physical custody

This is probably the largest factor that courts consider when ordering child support. Physical custody refers to which parent the child lives with (one or both). A parent without primary physical custody can still have partial custody or visitation rights.

For parents who share joint physical custody, who pays child support is based on other factors.

2. Who has legal custody

Legal custody refers to the ability to make major decisions about how the child is raised.

3. The income of one or both parents

Parental income is another large factor in the child support equation. In the US, states tend to use one of three models to award a child support amount:

This model considers both parents’ incomes in order to better equalize and maintain the child’s standard of living. It is currently the most common child support model used in the U.S.

Some states only look at the income of the non-custodial parent and order them to pay a certain percentage. The custodial parent’s income is irrelevant in this formula.

This is a more complex variation of the Income Shares model. The main difference is that it ensures that the non-custodial parent can keep enough money to meet their own basic needs first.

There are reasons for each model to exist, but the idea of child support should always be about fairness, not punishment.

For instance, if the custodial parent is wealthy and the non-custodial one is barely straddling the poverty line, paying support shouldn’t leave them unable to pay their rent.

That’s why many states have self-support provisions (or use Melson). Or, if it’s the other way around, the primary custodian shouldn’t have to struggle to put food on the table when the other parent lives in a mansion!

Variance in income can also affect child support when the parents share joint legal and physical custody. The court may order the higher-income parent to pay a higher percentage of costs, just as they would if income was pooled in a shared household.

4. How many dependents each parent has

Does either parent have children from a previous (or subsequent) marriage? Or are they caring for a disabled or elderly dependent relative? Do they owe or receive any support for their additional dependents?

Many courts will factor in a parent’s obligations to other legal dependents while settling the current case.

5. Expenses to support the child/children

Income isn’t the only factor that can affect the amount awarded for child support payments. Courts will typically also look at the real expenses parents incur to support the child.

Expenses may be split up into necessities vs extras and considered separately. Or, they may all be lumped together.

As you can see, these are all costs that are relatively stable and predictable. But there are often other things parents need to pay for that fall under section 7 child support expenses.

Who is currently covering these expenses? How much do they add up to each month? Are they necessary? What percentage is fair for each parent to pay based on their income? These are all questions a family court may ask.

6. Any possible reasons for deviation

Since most states tend to have formulas that guide child support decisions, it’s often just a matter of doing the math. Deviations are basically reasons why a judge might make exceptions to the formula.

Deviations are a good thing to discuss with a lawyer since they’re very much based on the family’s unique circumstances.

That said, whether women paying child support is common is an entirely different question. There are a lot of reasons why women pay child support less frequently.

This is the biggest reason why it’s rarer to see women paying child support. Mothers are more frequently the custodial parent. In fact, 82% of single-parent U.S. households are led by single moms. That’s a rate of about 6 to 1.

Because mothers are much more likely to be considered the primary caregiver, fathers pay child support more often.

Whether a mother is the custodial parent or not, her economic reality tends to be a grimmer one.

Non-custodial mothers also tend to be poorer, earning less than half as much as non-custodial fathers. As you can see, this can have quite a financial impact on single mothers.

The census also shows that only half of all custodial parents have legal or informal child support agreements at all. Custodial fathers tend to sue for child support less often since they generally do better financially.

Furthermore, non-custodial mothers are more likely to provide help in forms other than cash. 64.5% of custodial fathers reported receiving support in the form of gifts, clothes, groceries, and medical expense coverage.

Among parents who don’t have a legal child support arrangement in place, the kids are also more likely to stay with the mother at least part-time.

As you can see, the issue of women paying child support isn’t always so cut-and-dry. But if you’re in a situation where you owe child support, here are some tips for factoring it into your finances.

It’s best to consider child support as another one of your essential expenses like rent and utilities. If you don’t pay owed support, it could result in wage garnishment, license suspension, or even a warrant.

To make sure that doesn’t happen, try one of these budget templates/tools to get a clear picture of your income and spending. As a busy mom, remember to pick a budget method that is easy for you to stick with!

2. Track any extra expenses you cover for the child

Make sure to keep track of anything you’re paying for in addition to child support, especially section 7 expenses.

The idea isn’t to be a penny pincher with your kid but to accurately track what you’re spending for them in case you need to provide that information to the court.

Child support can add a big expense to your monthly budget. The average monthly payment in the U.S. is less than $500, but of course, yours will vary depending on your situation.

You can make room in your budget by cutting out non-essentials and finding creative ways to save money. For instance, something as simple as slashing cable can save you quite a bit of money every month.

Go through your finances and find things you can cut. This is a powerful tip that will help women pay child support!

4. Find ways to increase your income

Increasing your income will be beneficial to both yourself and your child(ren). If you already have a full-time job, use these tips to ask for a raise. If you have a part-time job or want to earn money on nights or weekends, try these ways to make money on the side.

You can start a side hustle, create passive income, and even find a higher-paying job if you have to. This will ease the burden if you do become one of the women paying child support!

5. Petition for an adjustment if you can’t afford the full payment

The court system isn’t meant to put struggling non-custodial parents into a dire financial situation. If you can’t afford the payments even after reworking your budget, petition the court to adjust the order.

You’ll likely have to show that your circumstances have changed since the first order. That could mean proving an income decrease, an injury/disability, or a new child.

While waiting for a modification, keep paying what you can. Partial payments look better to the court than skipped payments.

So now you have the answer to "Do women have to pay child support?" Although the situation may be complicated or painful, there’s nothing shameful about women paying child support.

You’re working hard and doing your part to give your kids a safe and stable childhood, even if you’re not sharing the primary home. Remember to plan financially to help ease the burden of paying child support.

Use your time with your children to give them a great foundation of knowledge they can use as they grow into adults. Check out our guide on financial literacy for kids!

is a writer for Clever Girl Finance and co-founder of DollarSanity. She is a part-time digital nomad with a passion for helping people find security and freedom via financial literacy. 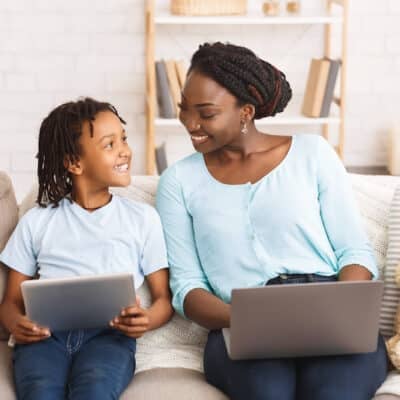 The 21 Best Jobs For Stay At Home Moms 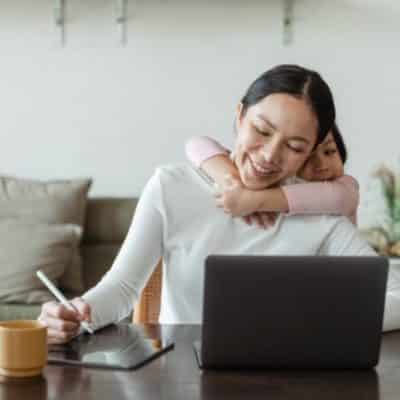 How To Survive Financially As A Single Mom 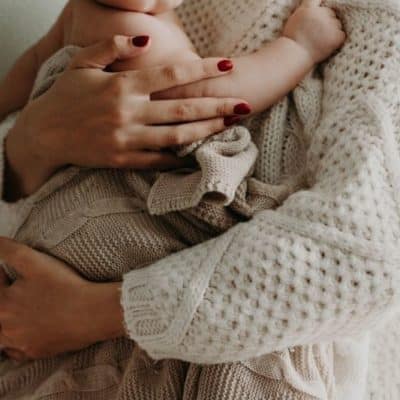 How To Afford Being A Stay At Home Mom